Paul L. Vasey is a Professor and a Board of Governor's Research Chair in the Department of Psychology at the University of Lethbridge, Alberta, Canada. His areas of expertise include Sexuality, Sex-differences, Gender-differences, Evolution, Development, Cross-species comparisons, Cross-cultural comparisons. Jean-Baptiste Leca and Noelle Gunst are Assistant Professors working in the same department.

This paper by the three was published as “Male Homosexual Behavior in a Free-Ranging All-Male Group of Japanese Macaques at Minoo, Japan” in Archives of Sexual Behavior, 43: 853-861, in 2014.

The extracts presented here focus mainly on the observed behavior and not the explanatory hypotheses, which are concerned with androphilic homosexuality rather than pederasty. Inline references and some statistical data have not been included.

[...] Interestingly, unisexual male groups commonly occur in natural settings in species that form polygynous or multi-male/multi-female breeding groups. In many gregarious primate species, dispersing individuals transfer directly from one mixed-sex group to another, but, in others, including several colobine and cercopithecine species, individuals may join non-breeding (usually all-male) groups for variable periods. All male groups of primates are typically subordinate to mixed-sex groups, either travelling independently or occupying suboptimal ranges around mixed-sex groups. Despite the fact that they are common in many primate species, all-male groups have rarely been the focus of any detailed studies. [...]

There are three reasons why the Japanese macaque (Macaca fuscata) is an ideal non-human primate model for research on male homosexual behavior. First, immature male Japanese macaques display a large repertoire of sociosexual[1] behavioral patterns, such as male-male mounts in playful or tension-reducing contexts. Second, certain populations on the island of Honshu in central Japan (e.g., at Arashiyama, near Kyoto city) have been reported to exhibit male homosexual behavior. Patterns of courtship, mounting, and inter-mount behavior are very similar across male-male and male-female sexual interactions. Third, long-term studies of life history of Japanese macaques showed that almost all males eventually leave their natal group between the ages of 3-8 years, mainly during the mating season. Such males may either transfer directly into another mixed-sex group, temporarily join an all-male group or remain solitary for a period of time. All-male groups of Japanese macaques have been reported at several field sites, including Arashiyama, Kinkazan, Koshima, Minoo, Ryozenyama, and Shodoshima, but detailed studies of these naturally occurring groups are needed. [...]

We studied three free-ranging groups of Japanese macaques, living in the Meiji Memorial Forest of Minoo Park located on the outskirts of Minoo city, Osaka Prefecture, central Japan. The first two groups, namely Minoo F and Minoo L, were mixed-sex multimale-multifemale groups, derived from an original group that fissioned into two stable social units in 1955. The third group was an all-male group. Although there are no recent reports on the all-male Minoo group, its origins may be traced back to the main group fission. [...]

The all-male group had roughly the following composition:

A male homosexual consortship was defined as a temporary, but exclusive, sexual association between two males and occurred when two partners engaged in a mount series (i.e., three or more mounts within a 10-min period). A consortship was deemed to have terminated if the two partners were not in proximity (separated by a distance of more than 1 m) and exhibited no mounting for 10 min.

(2) ventro-ventral mounts occurred when the two participants embraced each other with their arms and legs, with chest-to-chest and belly-to-belly contact, facing each other in a standing, sitting or lying position. [...]

Dyad A involved a juvenile (3 years) and a young adult (7-10 years). Four consortships were recorded, lasting from 2 to 17 minutes, and consisting of a total of 37 mounts. Thirty-six of these mounts were performed by the adult male. All mounts were ventro-ventral (Fig 1a).

Dyad B also involved a juvenile and a young adult. Three consorts were recorded, ranging from 5 to 8 minutes, and consisting of a total of 16 mounts. Nine mounts were performed by the adult, 7 by the juvenile. All mounts were dorso-ventral.

Dyad C involved a juvenile male and a middle-aged adult male (11-15 years). Two consorts were recorded, lasting 5 and 8 minutes, and consisting of a total of 10 mounts. Six mounts were performed by the adult, 4 by the juvenile. All mounts were dorso-ventral.

[...] We found that 49 mounts (77.8%) were solicited by the juvenile males who grabbed (59.2%) or pushed (22.4%) their adult male partners or crouched on the ground while screaming (18.4%) within a few seconds before mounting occurred. In dyad A, mounts were almost exclusively unidirectional, with 97.3% of mounts (36 out 37 mounts) being performed by the adult male. In the other two dyads, mounts were more bidirectional, with the juvenile and the adult male performing a similar number of mounts within a given mount series. [...]

When not engaged in mounts, the main three activities exhibited by male consort partners were allo-grooming (48.2 +/- 14.9% of inter-mount time), resting (36.2 +/- 11.0%), and vigilance (13.2 +/- 9.9%). All allo-grooming[2] bouts were directed to the male mate. In general, male mates did not separate between mounts (2.2 +/- 0.3% of inter-mount time). Rather, during inter-mount intervals, they typically stayed in body contact (97.8 +/- 3.6%) and huddled, i.e. faced each other in a ventro-ventral orientation (80.7 +/- 5.2%) (Fig 1b). Vigilance activity occurred in all but one consortship. During the consortship in which vigilance did not occur, both partners were located at the periphery of the all-male group and hid themselves behind vegetation. We did not record any agonistic interactions between partners during male homosexual consortships.

In six cases, male consortships terminated when one of the two partners left and no mounting was recorded for at least 10 min. In three cases, intrusions terminated the consortships. In each of these instances, a third-party male aggressed the consorting juvenile male. However, the male intruders did not attempt to acquire exclusive access to the juvenile males as sexual partners following the intrusions.

... as with all heterosexual and female homosexual activity, male-male sexual interactions occurred during the fall-winter mating season.

... the three juvenile males who engaged in same-sex consortships exhibited physical and behavioral cues that are indicative of increased sexual receptivity during the estrus period in female Japanese macaques, namely a reddening of the face and shrieking vocalizations (reminiscent of female estrus calls). These two cues were also reported in sub-adult central males engaged in homosexual consortships with young adult solitary males at Arashiyama[3]. The existence of female-typical sexual behaviors (i.e., shrieking vocalizations) in juvenile males underscores the fact that males in this species exhibit bisexual potential, which Dixson (2012) argued is characteristic of many non-human primate species. Although the gonadal condition of the juvenile males was not investigated, 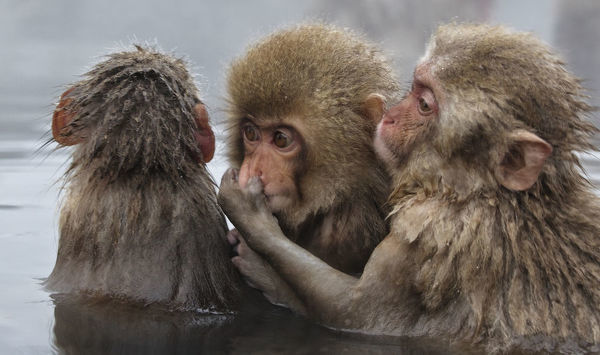 it is noteworthy that their scrotal sacks lacked the deep reddish hue that is typical of sexually active adult males. This suggests that although these juvenile males engaged in sexual behavior, they were not yet fully sexually mature in a physiological sense... aggressive responses by third-party males toward male homosexual consortships that were not performed in the service of sexual partner acquisition were similar to third-party male "interference" behavior that is directed to both heterosexual and female homosexual consortships.

Our observations of ventro-ventral mounting in one male-male consortship dyad -- a pattern which is unusual in Japanese macaques (but see Vasey & Reinhart, 2009) -- may reflect a flexible behavioral response by two sexually motivated partners whose body size discrepancies do not allow for double-foot clasp mounting. A similar explanation for ventro-ventral mounting in male mountain gorillas has been proposed.

[1] The authors define sociosexual as "behaviors that are sexual in their structure, but underlain by little or no sexual motivation and instead performed for their adaptive social functions."

[2] Allogrooming is a form of caregiving through physical contact, typically where one animal uses its hands, mouth, or other part of its body to touch another animal. The word “allogrooming” means “grooming another” and usually refers to same-species grooming. [Encyclopedia of Animal Cognition and Behavior at SpringerLink]

[3] Takenoshita (1998) observed: "Prepubescent males showed several characteristics which are typical of ovulating females; they had bright red faces and emitted vocalizations similar to 'ovulating calls'. Additionally, the prepubescent male tended to sit in front of the young male with ventrodorsal contact during the mounting events as is seen in male-female mounting events. In fact, when a prepubescent male exhibited the above behavioural and physiological characteristics, he and his partner strongly resembled the mating pair of a young male and ovulating female. [Takenoshita, Y. (1998). Male homosexual behaviour accompanied by ejaculation in a free-ranging troop of Japanese macaques (Macaca fuscata). Folia Primatologica, 69, 364-367.]"

If you would like to leave a comment on this webpage, please e-mail it to greek.love.tta@gmail.com, mentioning either the title or the url of the page so that the editor can add it. You could also indicate the name by which you wish to be known.